In this article I’ll focus on two items that can be quite useful and sometimes critical in your photography travels. If you’re into nature and wildlife photography there’s a pretty good chance you’re carrying several kilograms of long lens glass and at least one or more (semi-) professional DSLRs. And when the opportunity comes up, that shot you’ve been waiting for, for months or even years, you want to have access to your gear as quickly as possible without having to dig around, attach a different lens to your camera, struggling to keep your bag and gear upright instead of falling into the sea or off a cliff… just to name a few of the many challenges for nature photographers.

Ideally, you’ll have immediate access to your camera, attached to your super telephoto prime lens. There are however not many camera bags out there designed for this purpose. Let’s go through a couple of examples: I have a 2 ThinkTank bags that wil help me get a lot of my gear on a plane. But they’re not going to help me in comfortably walking long distances and having immediate access to my gear. I also have a Lowepro Pro Trekker 400 AW bag which I’ve carried on my trips to Asia; last time to Bohol in the Philippines (check out my previous article: Gremlins vs. the Nikon 200-500mm f/5.6E). Similar to the ThinkTank bags, the Lowepro can store a lot of gear but it will not comfortably store your 600mm prime. And on my last trip I discovered the Lowepro is insufficiently waterproof when water had entered the bag after I left it for about 20 minutes outside in the rain (drizzle).

On my last trip to Canada, where I had the opportunity to capture some amazing images of Snow Owls (see Snow Owls of Canada, Part 3 (and: a little on image editing) I tried a new bag: the F-stop ‘Sukha’. One of the key reasons I got the Sukha is its design to store a 600mm prime lens attached to a DSLR – upright, and to retrieve the entire set quickly from the top opening of the back. F-stop bags use an internal ‘bag’ for your gear called ‘Internal Camera Unit’ (ICU), available in various sizes. You can add one big ICU in your bag, or a combination of several smaller ones depending on your personal preferences; e.g. the type of gear required for the day, or several days, the type of environment, the type of photography etc.

The largest ICU to be used with the Sukha is the rather massive ‘Tele Master’ ICU. This ICU wasn’t available at the time I got the Sukha, so I went with the second largest ICU, the ‘XL Pro’. 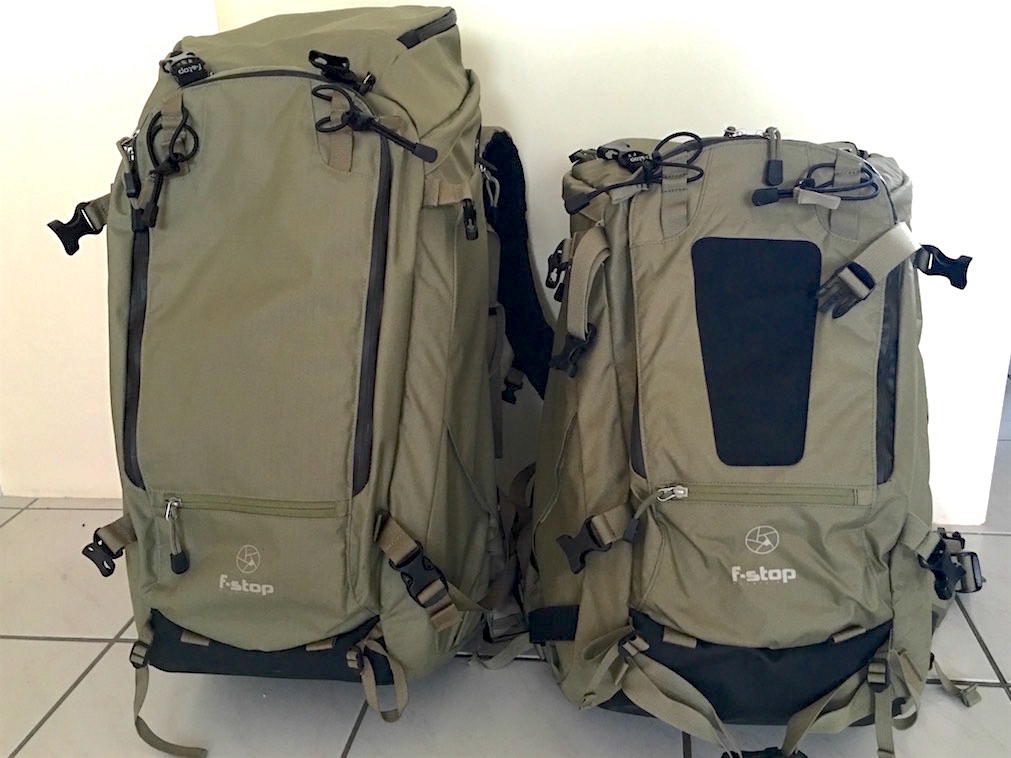 When the Tele Master ICU did finally become available I decided to buy it and see how it would fit in the Sukha. What a combination! The ICU fills the entire bag and (obviously) has the unique top opening, so you can have access to your gear in an instant, without having to open the zippers on the inside of the bag first (F-stop bags open from the inside, rather than from the outside). There’s just one problem: due to its size it’s a (near impossible) struggle to get the Sukha on a plane as carry-on baggage (for obvious reasons). One time I actually had to remove the XL Pro ICU with my gear from the backpack as it didn’t fit anymore in the overhead bins. With the Tele Master ICU inserted, forget about bringing your Sukha on a plane; it will have to travel separately as checked-in luggage.

While F-stop indicates the smaller version of the Tilopa, the ‘Ajna’ is suitable as carry-on baggage, the Tilopa should be accepted with a number of airlines as well (with a bit of luck; after all I did manage to get the Sukha on a plane…). It’s a little less tall (app. 9 cm/3.5 inch) than the Sukha and is a perfect fit for the XL Pro ICU, which became unemployed after I got my Tele Master ICU. So how does this combo help you in the field? Here’s how I plan to use these bags:

So where do you keep your precious gear when you’re on a plane with your Sukha checked in? Well, why not in your Tilopa and XL Pro ICU, which you’ll store nicely in the overhead bins! And even if the airline staff starts complaining about the size of the Tilopa, you simply take out the ICU and easily place it in the overhead bin separately. It should easily fit in the ‘standard’ medium to long-distance carriers but also on some of the shorter distance ones (as I’ve experienced).

These bags are made to the highest standards and can withstand almost any kind of weather: I’ve used the Sukha in snow and rain and everything stayed dry inside. And if you plan to use them under some kind of waterfall (…why?) you can even add one of the F-stop protective covers. Lastly, no: I’m not being sponsored by F-stop. I just believe these bags are really great and I will use them a lot during my nature photography trips… And I hope to write about any new and hopefully useful experiences, tips & tricks.

The other very useful gear ‘gadget’ I recently acquired is the LensCoat TravelHood (no, not getting sponsored by them either …). Lens manufacturers often provide relatively long protective lens hoods with their super telephone prime lenses, and the challenge or rather issue is that these hoods can take up a lot of space, can easily damage, and are (very) expense to replace. On one of my Alaska trips I saw a photographer drop his Nikon 600mm ‘G’ lens: the hood absorbed most of the impact but cracked as a result: $500 instant write-off …! And if you want to carry your big glass in your Sukha or Tilopa bag (for example), there is very little to no space left for a bulky lens hood. This is where the LensCoat TravelHood  comes in.

The TravelHood weighs less then the original lens hood (in my case the Nikon 600mm f/4E FL) which is a nice ‘plus’; it also easily folds flat so it won’t take up any serious amount of space – you can simply store it in your backpack (e.g. front compartment) and it’s around half an inch (1.25 cm) shorter compared than the original hood as well; i.e. measured from the end of the lens to the end of the hood. In less than a minute or so, you simply fold the TravelHood over the outer edge of your lens (there’s a soft rubbery cushion) and the Velcro strips ensure a tight fit. It’s not exactly the cheapest alternative but it’s a very nice invention, you’ll save some weight and precious backpack space, and you will not risk cracking original lens hoods anymore, with associated costs. I’ve now removed my original Nikon lens hood and will store it; instead I’ll be using the TravelHood from now on. 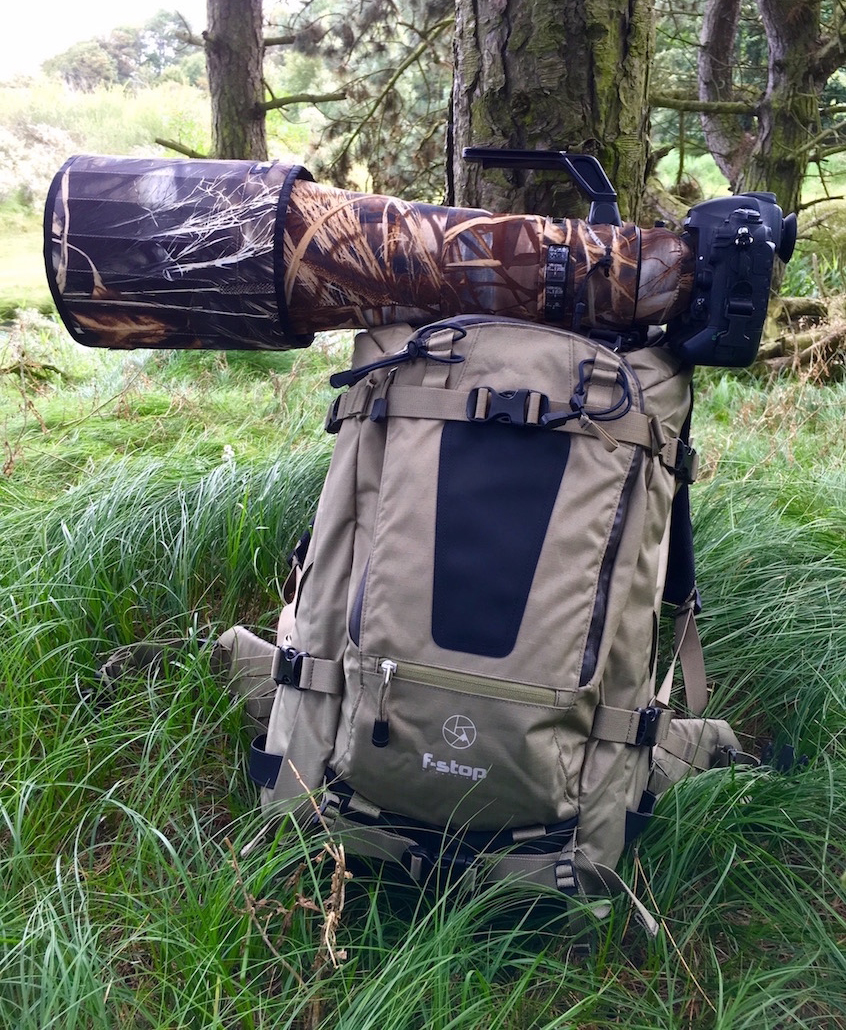 Initially I had in mind to include in this post a comparison between the Nikon 600mm f/4E FL prime lens and the excellent 200-500mm f/5.6E telephoto zoom, but I’ll create a new article for that one. Should be ready in a day or two…!